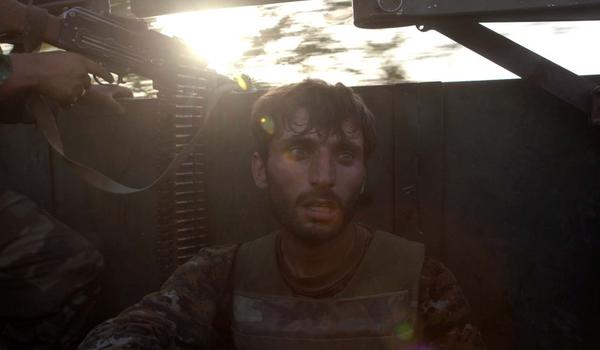 I have been lucky enough to watch two documentaries by Saeed Taji Farouky. The first one, co-directed with Michael McEvoy, is a year in the life of the Afghan army. I must say it is so striking I have already watched it twice. The other one is about Salah Hmatou Ameidan, an athlete who uses his running as activism – but more on that in another post.

Tell Spring Not to Come This Year (2015) focuses on two men within a unit in one of the most violent parts of Afghanistan. One is a captain, the other a private, but either way I had never heard of the Afghan army – this time this is all about them. You only see the American helicopters leaving, but that’s about it. The characters tell about the reasons they enrolled in the army, the relations they have with the Afghan people, torn apart between military and Taliban violence. They also develop their feelings about the US army’s behaviour and departure.

I felt close to these people because of the voice-overs and the utter absurdity of some situations – such as when the police abandon their post with all the weapons, later picked-up by the talibans. At the same time I realised how little I knew about Afghanistan, for instance the beautiful countryside – rendered by an equally beautiful photography – the diversity of languages, etc.

This film challenges all the representations of the Afghan war but by extension of most conflicts led by Western countries, which only depict one side. But this is the Afghan soldiers’ country, their people, their government, and their existence.

Tell Spring Not to Come This year

Tell Spring will be shown at Cambridge Film Festival on 6th and 7th of November: http://www.cambridgefilmfestival.org.uk/themes/cambridge_film_festival/files/brochure-2015.pdf